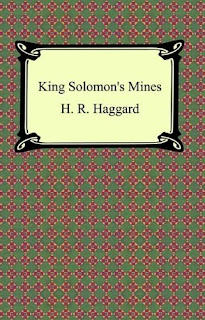 This book was on the English Literature course when I studied it way back in the 1960s. I suppose its adventure theme, with deadly battles and buried treasure, was judged suitable to capture the interest of 16-year-old boys. Boys and their reading - still a matter of recurring educational concern.

I came back to the book after having watched a TV programme in which it was referenced. The programme charted the course of the English novel and, as one of its themes, explored literature associated with Empire and colonisation. Hooked, I decided that it might be interesting to reread KSM after more than 50 years. An early front runner of this type of story there are many books of this genre today and this one is still easily available.

Stuck in my memory

Some of the characters and situations had certainly stuck in my memory and as I met up with them again, I wondered why that was. Since they stuck, there must have been something that appealed, and I consider now that it was that adventurer aspect. However, the most obvious thing that struck me from the reread was just how much society norms and values have changed since that time. Some of the references and dialogue struck me as somewhat racist and sexist, not to mention scenes of hunting and ivory gathering, and on occasions caused some moments of discomfort.  These attitudes were prevalent in the late 19th century. I'm glad that we have left lots of that behind but I'm just as sure that a toxic residue remains. Why keep reading then? Perhaps a good way to learn what one’s values are is to be aware when they are being offended. But was the sixteen-year-old offended? Or did I simply take it for granted? With 50 years hindsight I stuck with the book.

What might have been helpful to me as a sixteen-year-old student was the audio narration that is available, read by Timothy Jones.  Read - the word doesn't do the rendition justice. It was a consummate voiced performance in which he took on the range of voices from the narrator, Allan Quatermain to the screeching Witch doctor, Gagool. The accompanying narration made for a quick reread. On occasions I read, listened and did both concurrently. That's a technique I'll be using more in the future to engage with even more books.

One last thing…A sixteen-year-old once learned what biltong was. That was a word that also stayed in the memory thanks to its use in this story. The product is available in a local supermarket, so I got some.

Something else to chew on.