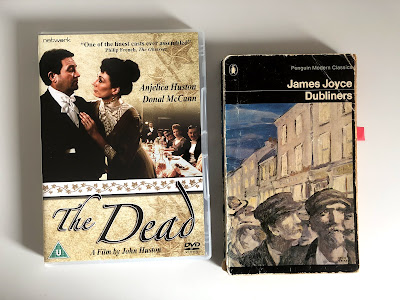 It's by now a tradition in our house on Saint Patrick's Day to watch together a film with an Irish theme. Usually the day offers an annual excuse to watch Walt Disney's Darby O'Gill and the Little People - a film that always seemed to be playing locally when I was growing up.
But this year nostalgia demanded something different, something more in tune with the sensibilities of these pandemic times. The choice was John Huston's last film The Dead portraying the last story in James Joyce's Dubliners set in 1904 on January 6 - the feast of the Epiphany.
The film starring Anjelica Huston, the director's daughter, and Donal McCann was made in 1987 but I first saw it when it was released on VHS, replacing it years later when that platform gave way to DVD.
It would have been lovely if subtitles had been incorporated because some of the language is so beautiful. Not to worry though as the Penguin Modern Classic edition of the book has been a constant companion through various house moves and even more bookshelves.
The 1972 edition, its cover depicting a detail of The Illuminated Town by Jack B Yeats (brother of William B), is showing some yellowing of pages but this somehow felt in keeping with ageing and the passing of time.  Having watched the film last night I took the opportunity to read the text again this morning.
In the story the character Gabriel Conroy makes an after-dinner speech in which he laments the disappearance of more "spacious days" and departed loved ones. He reflects that there are many sad memories on our way through life but nonetheless we must continue our work among the living:
"We have all of us living duties and living afflictions which claim, and rightly claim,
our strenuous endeavours".
Joyce writing in 1914 could have been penning a memento vivere - remember you must live - for his time and ours.
As the guests take their leave, there is a wonderfully described staircase moment, superbly conveyed in the film, around the rendition of a song, The Lass of Aughrim.
This releases a flood of emotions in our two main characters, bitter regret, jealousy, passion and its absence, culminating in a sharp realisation of the human condition, that connection between the living and the dead.
My DVD film and book will continue our journey together. Granted it might be more poignant to watch and read on Epiphany evenings.
If not there's always Saint Patrick's Day.
Posted by Chris Tracey on Thursday, March 18, 2021