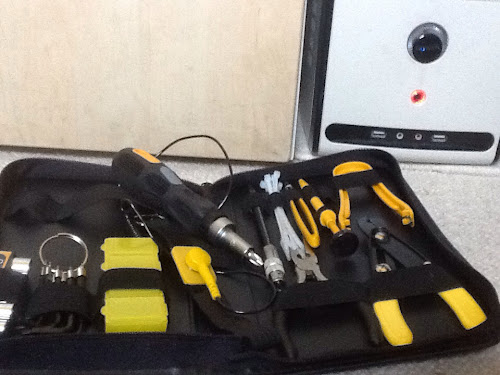 My old computer has been shows signs of age for a while but rather than replace it I thought it would be a good idea to tweak its capabilities. I uninstalled no longer used and unwanted programs, removed several from the start menu and the system tray and sure enough, it operated much more quickly.

The insides of computers are uncharted terrain as far as I'm concerned but I figured why not upgrade some of the hardware? If something goes wrong, I reasoned, then I'll get a new computer. If it works then I'll have learned something new. The RAM was the place to start, and doubling the memory capacity the selected project.

A helpful computer magazine provided details of a website that could check the computer memory remotely and would also suggest components that would be compatible with the machine. Neat, service with a sale in mind. This was duly undertaken and a quick look at the instructions revealed that I had to be sure to work in a static-free environment, removing plastic bags and papers from around my desk top. To be on the safe side, I bought a computer toolkit. This comes with earthing devices and non magnetic screwdrivers so I felt well prepared for the job and proceeded with some confidence that I could follow the steps to a satisfactory conclusion.

For such a large box, the circuitry inside was very compact. I vacuumed out the accumulated dust and fluff of the past six years wondering how it had got there and in doing that found It easy to see where the new chip should be added.

I added the component, bolted everything back together and switched on. Sure enough it started okay but when I checked the properties @ My Computer the memory had not changed....not by as much as a kilobyte.

Now it had taken years for me to get to this technological first but only seconds to decide to unplug everything and reinstall the component. Minutes later, I switched on again only to find that this time the computer wouldn't boot at all. Helpfully the instructions suggested that if this happened I was to remove and install the component exerting more pressure until it clicked into place. Around 30 pounds of pressure. So, opened now for the third time - getting used to this - and with the mother board bending under the pressure it was a relief to hear the clicks that announced the additional RAM was securely in place.

Wouldn't it be great if we could simply exert more pressure to make things easier? Take a chance to get past those mental blocks and upgrade the circuitry of our lives? And isn't it helpful to know that others have been there before? Some have even written instructions.

I think I'll upgrade the disc drive next. The inner workings are much less of a mystery now and there are always how to guides.

But I'll still be mindful of that static!